This year, 2021, marks our 20th anniversary and it is a time to celebrate! Milestones include reaching over 2 million accepted species and the completion of the new Catalogue of Life infrastructure.

Catalogue of Life (COL) is an international collaboration. The COL Checklist aims to provide researchers, policy-makers, environmental managers, and the wider public with a consistent and up-to-date index of the names of all the world’s known species. COL originated in 2001 as a partnership between the organisations Species 2000 and the Integrated Taxonomic Information System (ITIS). Both organisations already started activities in the mid-90s. ITIS was originally created in 1996 at the behest of the United States White House Subcommittee on Biodiversity and Ecosystem Dynamics. The foundations of Species 2000, the legal organisation of the COL Checklist, were formed early in the 90s in close collaboration with partners such as the International Union for Biological Sciences, the Committee on Data of the International Science Council, and the Convention on Biological Diversity. After its formation, apart from institutional funding, COL received grants from the European Commission, the US National Science Foundation, the Dutch Ministry of Science and Technology/Netherlands Biodiversity Information Facility, and the World Bank/ Global Environmental Facility Fund. The Global Biodiversity Information Facility (GBIF) is one of COL’s prime supporters and users. Since 2017, the COL research infrastructure is included in the global strategic and work program of GBIF.

At present, the COL Checklist, as of the release of the 2021 Annual Checklist (Bánki et al. 2021, July, 2021), has reached just over 2 million accepted species names, a similar number of synonyms, homonyms, and prior combinations. The COL Checklist is carried by an international community of 165 taxonomic data sources. Data custodians range from individual data custodians, such as the Catalogue of Craneflies of the World to well organised community initiatives such as the World Register of Marine Species. Close to 500 individuals are actively involved in making the COL Checklist possible. COL is maintained by a distributed secretariat at the Naturalis Biodiversity Center and the Illinois Natural History Survey / Species Files Group. The infrastructure is hosted at the GBIF Secretariat. COL operations are supported by contributions from the Smithsonian Institution and the Chinese Academy of Sciences. 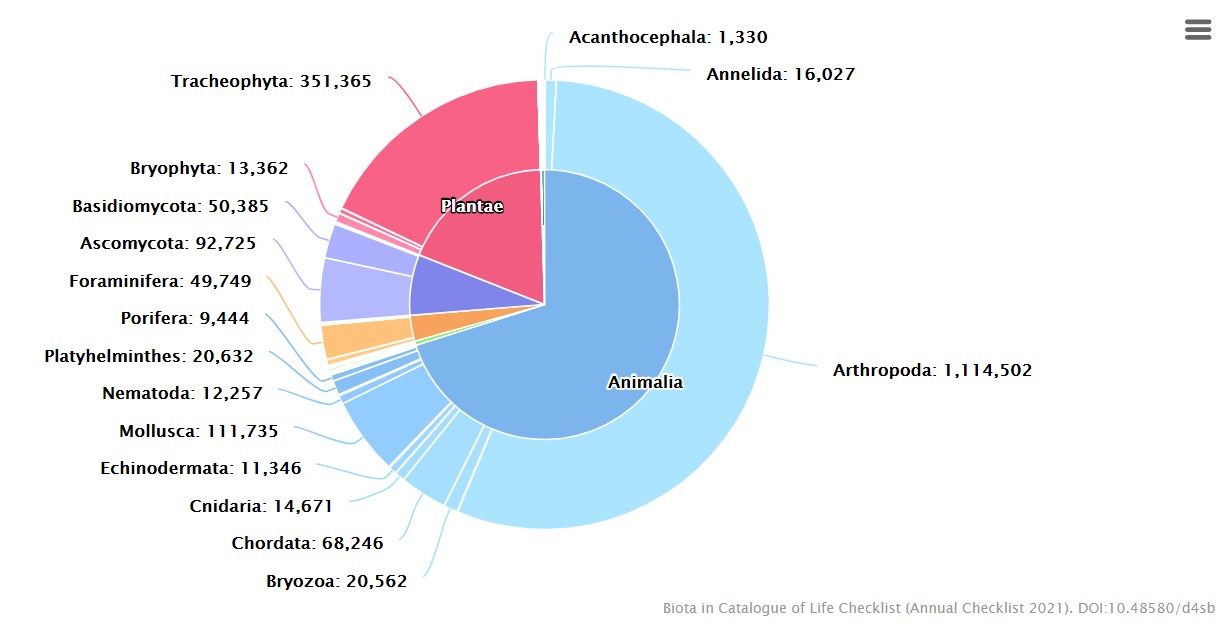 Over the past years we, as COL governance, have been overhauling the digital infrastructure of COL. The new COL infrastructure powered by GBIF, functions more efficiently, is on the path to better facilitate the work of the taxonomic community, and provides a more sustainable service for users at all scales. The new COL infrastructure consists of a public portal, ChecklistBank, and a new API. One of its new features is that COL provides stable taxon name identifiers. ChecklistBank should function as an open data repository for well curated taxonomic and nomenclature data sources. The intent is to create more opportunities to address taxonomic and scientific name gaps associated with the COL Checklist. This will enable the transformation of the COL Checklist to serve as the GBIF Backbone Taxonomy in the future. COL is close in finalising a shift to open data licenses, supporting CC-0 and CC-BY licenses. In the next few years, together with the taxonomic community at large COL would like to address the apparent taxonomic gaps that still exist in the COL Checklist.

COL is a wonderful example of a cost effective, functional research infrastructure that came to life by true worldwide collaboration, focus, and persistence of dedicated people offering their time to make it work. COL invites everyone who has an interest to become part of the effort. COL’s accomplishments are worth celebrating!