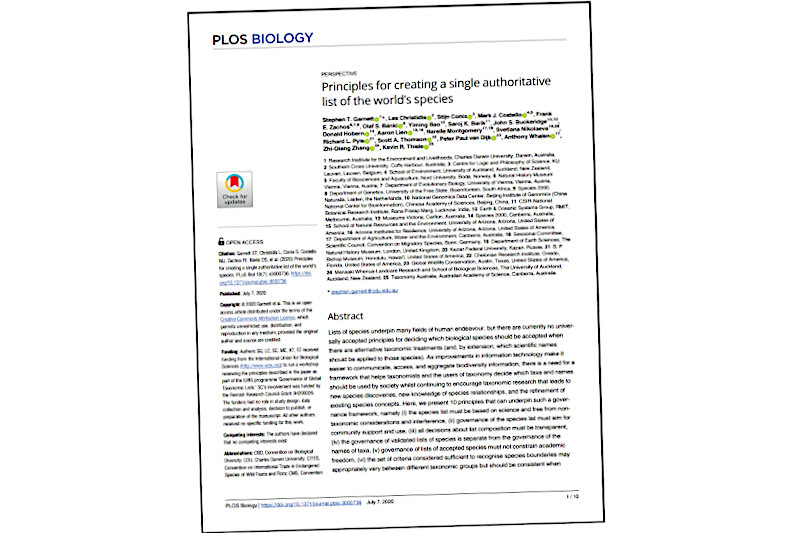 Taxonomy is a thriving and vital science, based on centuries of work by countless dedicated biologists. The literature underpinning our knowledge of the world’s species spreads to many millions of pages, a large portion of which are now accessible online through the efforts of institutions and especially of the Biodiversity Heritage Library. With the advent of molecular technologies, taxonomists have new tools to explore some of the complex results of evolution and to gain new perspectives on the boundaries between species.

The result of all this historical and contemporary activity is that our knowledge and our ability to distinguish species has grown steadily for more than 250 years. Every year enables researchers to revise the work of their predecessors. This often leads to the description and listing of new species but often also to recognition that some scientific names and descriptions relate to a single species. The complexity of the mapping between scientific names and species is the very reason that Catalogue of Life exists.

For taxonomists working on any group of organisms, these changes in knowledge are a natural part of their work and advance the science. However, it is difficult for many users of species information to keep up with new research and to understand the significance of each change. This has proven a particular challenge for conservation bodies, governments and the international treaties such as the Convention on Biological Diversity (CBD), the Convention on International Trade in Endangered Species of Wild Fauna and Flora (CITES) and the Convention on Migratory Species (CMS).

Species conservation depends in large part on governments and citizens knowing which species are protected by law and being able to communicate clearly about these species. Changes which are a natural and desirable part of the taxonomic process can disrupt this. When a taxonomist describes a new species, does it automatically get protection? When taxonomists disagree, how can policymakers know which taxonomic decisions are supported by the best science? If science determines that an organism listed as a protected species is actually several species, should protection automatically be transferred to all the new species? Governments and conservation bodies depend on taxonomy, but there are challenges in lining up the needs and processes of the two domains, particularly where international collaboration is necessary.

The International Union of Biological Sciences (IUBS) funded a workshop that took place in Darwin, Australia in February 2020 and included representatives from the Catalogue of Life. The workshop was to consider whether a governance model can be established to give users of taxonomic information the confidence and (as far as possible) stability they need to support conservation and other needs. A new IUBS Working Group on Governance of Global Taxonomic Lists was established following the meeting.

Attendees recognized that there are established governance processes that oversee the assignment of names to species (the rules of nomenclature) but that these (quite correctly) apply only to the naming process and not to taxonomic decisions on whether populations of organisms belong to the same or different species. These latter decisions are the heart of taxonomy as a science and taxonomists must be granted freedom to be able to describe new species wherever they find them. Any species list developed for any purpose will be a snapshot of knowledge at a particular point in time and will need to be updated and replaced many times. The solution will be to ensure that users of species information have access to well-maintained and clearly documented lists and that these lists are the product of well-understood governance processes that have the support of the widest possible range of taxonomic viewpoints. Legal frameworks and other constraints may still hamper rapid uptake of new versions of these lists, but they will serve as a clear scientific baseline for discussions.

The workshop participants also recognized that Catalogue of Life has been active for decades in building a global community of taxonomists and maintaining an increasingly complete list of the world’s species. COL is therefore the natural framework for ongoing future development of global taxonomic lists. COL can play a major part by working with users to make improvements to the governance and transparency of the processes and decisions behind the COL Checklist.

The recommendations from Darwin were published in PLOS Biology as _Principles for creating a single authoritative list of the world’s species. The most important component of the paper is a set of ten principles proposed as the basis of governing the adoption of global species lists:

These principles align well with the goals of Catalogue of Life and its partners. With the development of the new COL infrastructure, we are in a much better position to track and present information on the sources and provenance of all parts of the COL Checklist. COL will continue to work with the other members of the IUBS Working Group to close the remaining gaps between taxonomists and the needs of policymakers, conservationists and other users.